Note: this article is about a passed event.

david asking for funding for a wind turbine project

meeting asks whether there exists a budget no

talk about type of bearings to use

is the project going to be funded? 40% upfront, 100% upon completion majority votes yes

marc: workshop was amazing, 13 people running around, 150 pieces of sushi made with 2kg of rice, introduced 2 sushi virgins to sushi, marc would like to recreate the workshop because everybody enjoyed themselves

the workshop was cozy, lasted until 3:30 AM

bartek will get 2 from jhemp and jan

send to mailing list: does somebody have a set of plates (non-plastic) to replace our shitty plastic plates

-> poll on mailing list who wants to go this year, who will take responsibility of taking over communication

Marc presents HacKids workshops: every first Tuesday of the month

the question is: do we want to give free workshops to schools?

kenn: we can get funding through FNR, I already spoke to the guy who decides these things

kenn: it is a question of time, although marc is very motivated, how will you find other people to help you out

marc & bartek will write up funding proposal to FNR / MinEduc, David suggests that we should also contact SNJ to be added to list of acitivities for official helpers

get funding from strassen! there is a deadline!

is it possible to limit stars showing for groups other than reporter only?

it should be left up to the talker whether

who edits it? the PR group

should we buy one? not decided yet as no particular model 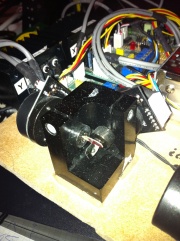