Usually this shows that ADHS is there: all LEDs are off except green

Space state is open but door is locked

This is often the case during the night when members lock the front door for safety: orange and red LEDs are on

Front door is unlocked but alarm is on

Very bad situation. Someone switched on the alarm but forgot to lock the door: bright blue LED is on

Space state is open and alarm is on

This should never happen. You're screwed. 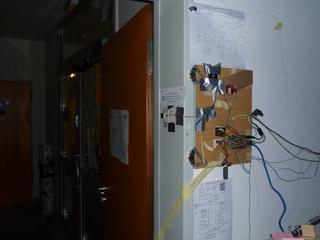